Kadapa is a small organized city situated in the Kadapah district of Rayalaseema region in Andhra Pradesh. This city was developed by the Basireddy family. It is also the district headquarters. Located at a distance of about 8 Kms away from Penna River, Kadapa is one of the oldest municipalities in the district.

Kadapah is situated on tectonic landscape and is surrounded by the hills of Palakonda and Nallamala on three sides. The region is filled with rich Red and Black ferruginous soils. Kadapa is also known as “Gadapa” which means Threshold in the local language Telugu because in olden days, devotees had to go through Kapda to reach the sacred hills of Tirumala to visit Lord Venkateswara.

Kadapa was ruled by several rulers like the Cholas, Pallavas, Nizam Nawabs, Kings of Vijayanagara Empire and finally was ruled by the British. Pallavas were the first to rule Kadapa in the 5th Century. After defeating Pallavas, Cholas ruled the city in the 8th century. Next the rulers of Banas took over who were followed by Rashtrakutas. King Indira III was the most influential ruler who brought lot of glory and power to Kadapa. After his death, Cholas ruled Kadapa. Then Vijayanagara Kings ruled the region. Doctrines of different dynasties can be found in the city even today. Kadapa with its rich history brings important archeological excavations that narrate more about the ancient past of the entire region.
Read more on the history of Kadapa, here 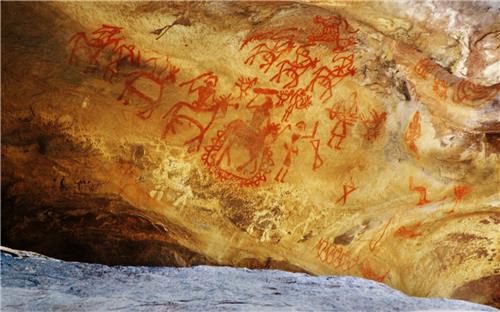 The Archeological Survey of India found a site in Chintakunta Village near Kadapa that had rock paintings belonging to the Megalithic and Neolithic period. The site dates back to the period of 8,000 BC – 1,500 BC. These rock shelters were found in the forest of Lankamal reserve that lies at about 7 Kms away from Muddanur village near Kadapa. These shelters are locally known as “Malluguni Banda” or “Dviti Mallana Banda”.
The site has 200 different rock art paintings showing the mystic figures of wild animals, human figures and geometric designs. The paintings are carved on quartzitic stones. Some paintings depict human figures with bows and arrows while some other show religious symbols that have been drawn in a theme with white paint. Some animals like elephants and elephant riders have been painted in red paint. Other paintings show deer, fox, humped bulls, reptiles, rabbits, birds and anthropomorphs. One can see the paintings of humped bulls in the shelter called “Eddula Avula Gundu”. 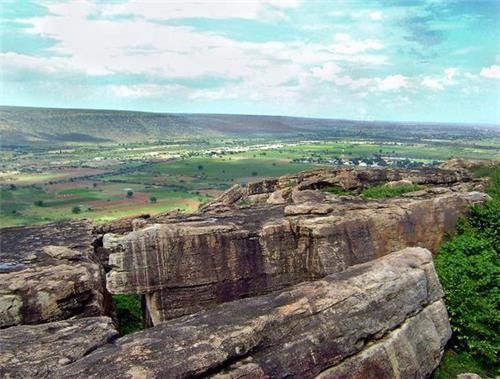 Some of the most interesting and important stones where rock paintings can be found on the Chintakunta hillock are: The Union Government declared this site as the monument of National interest. This site is the second largest site that has been ever explored in south India.  It is being preserved and protected on priority basis by the Archeological Survey of India.

Explore more about History of Kadapa